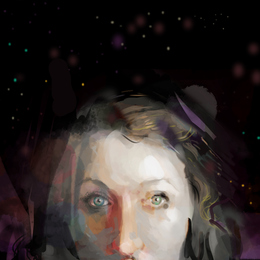 I first studied drawing and painting at Watts Atelier California. The methods practiced in atelier schools are based on meticulous renaissance traditions of masterful realism. Then, I attended Ringling College of Art and Design in Sarasota, FL, earning a BFA in Illustration. Illustration is all about bringing ideas to life - it is art created to clearly convey specific meaning. Now, I create works which I consider to be contemporary realism out of my studio in Vancouver, Canada.
​
While I am a part of a centuries-old tradition of artists depicting the human form, I also want my art to respond to the time in which I live. I am inspired by photographic effects, specifically the manipulation of exposure to create images that look 'real', but contain more than a single still image. In choosing poses, I focus on nuances of body language and expression. It is important to me that the people are presented realistically, showing unidealized beauty and what I think of as a modern sense of confidence in candid moments. I hope that when you stand in front of a piece you can feel the presence of the person depicted.